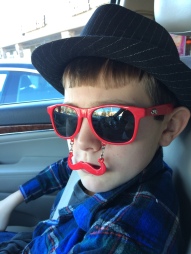 This is the first year that my oldest child does not believe in Santa Claus. It has been harder on me, I think, than it has on him. I have tried to make magical memories happen, even though he knows it is his dad and I creating the magic. A few nights ago, we realized he didn’t really feel a part of what was happening. We had been so busy creating the magic that we hadn’t let him be a part of it, so we decided to let him take over some of the magical responsibilities for his younger brother. Watching him help his brother look for our Elf on the Shelf, even though he is the one who hid it in the pile of powdered sugar the night before, has been magical for me. Getting to see him learn the true magic of the holidays is in the giving and not the receiving has been a powerful gift. 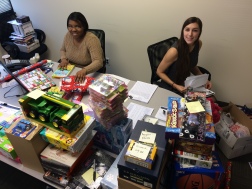 Last week at Jersey Cares we were getting down to the wire for Frosty’s Friends. At one point we still needed almost 250 gifts to meet our commitments to our agencies. I went home and virtually collapsed on the couch, my brain hurt from trying to figure out where to find the extra gifts. My boys asked me what was wrong and I told them that everyone was working hard to find gifts for the children who had asked Frosty for something and I didn’t know how it was going to happen. They asked me, “have you asked everyone you can think of?” I told them I thought I had. My oldest replied, “you haven’t asked us.” I told him that I had told him what we were doing. He replied, “but Mom, you didn’t ask us to help. You didn’t actually tell us what you needed. Let us help.”

In that comment I had my inspiration. I realized we had to ask. In the 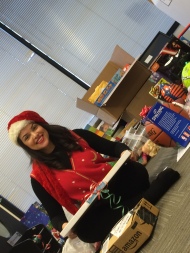 morning, we recounted our gifts, collected all the letters to Frosty that remained and created a wish list on Amazon. We still needed 157 gifts. Then we sent the wish list out on Social Media. Slowly, one at a time, the items on the wish list began to disappear. One gift, two gifts, three gifts at a time, the list whittled down. People were posting their purchases on social media. Our friends were sharing with their friends. Tuesday night I went home and the boys asked me where we were with gifts. I was able to tell them that during the day, friends of Jersey Cares had brought the list down to double digits. Only 99 gifts left to go.

All night, I kept tabs on the list and on Facebook. I felt like Ma in her kerchief as I saw things disappearing on the wish list. The boys kept asking, “where are we now?” By the time I fell asleep, we were down to 37 gifts left to go. In the morning, the first thing the boys asked me was, “did we do it?” I checked Amazon and was able to tell them that we had. In less than 24 hours, we asked for some holiday magic and our friends came through with it.

In the end, we were able to make the wishes of more than 2,500 children come true this holiday – more children than ever before. Friends of 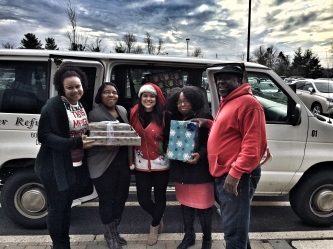 Jersey Cares really came through and all of us enjoyed the giving more than ever this year. As for me, it seems, once again I was taught a powerful lesson by my twelve year old.

From all of us at Jersey Cares – we hope the magic of the holidays finds its way to you.